Home > A gap year would mean the end. We had to act quickly, says the new director of the Tour de Feminin

A gap year would mean the end. We had to act quickly, says the new director of the Tour de Feminin 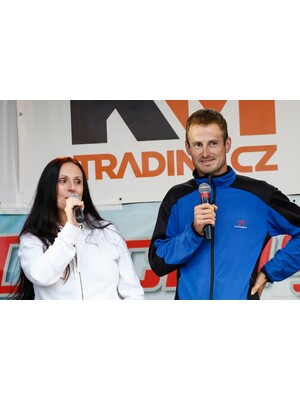 A few months ago there was a black cloud hanging over the Tour de Feminin. The planned reconstruction of a main road used for the race, seriously endangered the July event. For this reason, its founder and director Jiří Vích wanted to give the race a one-year break. But a return to the international cycling calendar would be very uncertain and therefore things had to happen.

"When we heard about the break in the race, we immediately knew that such a break will be half his death," said Jan Novota - a racer, coach and also the head of one of the largest amateur races in the Czech Republic Tour de Zeleňák, which runs on nearly the same roads as the Tour de Feminin.

That is why, together with Simona Davídková, an experienced international cycling referee, a local born, decided to take action. "We immediately initiated negotiations with the organisers and offered a helping hand with organising this year´s race. At the meeting, Jirka Vích decided without taking much thought to hand over the organization," Novota said. And after a quick discussion, the race soon returned to the UCI calendar. This year the event will be held 2-5. July.

Since its establishment in 1988, the event had no other director than Mr Vích. The new management thus feels a huge commitment. "Of course it is a higher level than the Tour de Zeleňák (a race for 750 amateur cyclists). Mr. Vích will always be the honorary director of the Tour de Feminin.

The 38-year-old director of Team CykloTrener, whose team regularly starts at the Tour de Feminin, wants to build on the work of his predecessor. "The race will be forever called the Tour de Feminin. If we get a general partner in the future, the name may be slightly longer. We are currently studying Mr. Vích's know-how, but we also want to bring new blood to the race." Says Mr Novota who has been following the event for over 20 years at least as a huge fan.

The most significant change so far will be changing the number of stages from five to four spread over four days. The racing days Thursday to Sunday will remain. The Saturday morning time trial, which was followed by another stage in the afternoon around Rumburk, is most likely to be dropped.

"From my own experience as a sports director I know what it is like for everyone. The girls got up at 6am to be able to start racing at 10am. Light lunch followed by an afternoon stage with a finish about 7pm, and dinner at 10pm meant a very long day. Proper cool down and massages often didn´t happen. The servicemen were not able to do the bikes because they were driving again on Sunday morning," Mr Novota explained. In addition, the organisers were up on their feet up to 14 hours on that day. "

We need to follow the current trends in world cycling. The race should start with an early evening prologue (short time trial). The traditional Friday morning stage will be postponed to the afternoon to bring in more spectators to create a better atmosphere. "The repair on the road number 265 going through the Šluknov area, scheduled for the July, really limits us. So for this year the stages will be run mainly in loops," Novota says.

The Varnsdorf born does not want to comment on other changes yet as he is still getting to know the race as a director. "First we want to get through our first year and only later to start playing with the race. However, this year we want to work mainly on promotion and safety of the race. Live streaming, large screens at least for the weekend stages that is what we also want to do this year already." At the same time, he also wants to broadcast stages live over the Internet. He has successfully tried this during the last two years of Tour de Zeleňák. He also wants to negotiate with the Czech National Television on promotion. Social networks will naturally be widely used. Moreover, each competitor should have her own chip during the racing, which will significantly speed up the processing of the results.

Although the race is "only" in the 2nd category of the UCI International Cycling Union, it always attracts well-known names. In the past, the world champion Hanka Kupfernaglová (five-time record holder), Olympic champion Mariane Vos, world champion in cross cycling Sanne Cant, and Czech champions Lada Kozlíková and Jarmila Machačová started here. In addition, this stage race was promoted by Pavla Havlíková and Martina Sáblíková.

"Of course we want other big names. But unfortunately, the biggest women's race in the world, Giro Rosa in Italy, is taking place at the same time attracting the biggest names. However not all top racers will race there and so we hope that maybe some of them will come to race here. Furthermore the race could be a good opportunity to prepare for the Tokyo Olympics."

But Czech girls must not be forgotten. "They will be invited as a priority. We are a Czech race and as many of our girls as possible should start. Where else besides us and Moravska Gracie can they race beside the world´s top? Dukla, Kooperativa and my team CykloTrener of course" smiles Novota.

And what about inviting Martina Sáblíková, who does no longer ride a bike as much, but who has twice gone mad here? "We haven't thought about it yet. True is that it would be a great marketing move. She probably no longer has the Olympic ambitions as a rider, but to ask for her participation is the least we can do. I would love to see Nikola Nosková here. She could prepare here perfectly, but she is probably going to be attend the Italian Giro," thinks the new race director.

To make it happen, he already put together his organizational team. According to Novota, the delegation of activities to others was a weakness of the previous director. "Jirka has been preparing the whole race alone. He has only put together a team at the end of the preparations. We will do it differently. I will be the director of the organising committee, Simona Davídková the director of the race itself. We will have around six heads of individual sections (i.e. track, accommodation, ceremony, office, and so on). Each of us will manage our area with the help of a number of volunteers without whom the race could not exist."

And once again mentioning the founder and father of one of the two women's stage races in the Czech Republic (the second is the spring Gracia Orlova) Jiri Vich. The connection with the name of the company itself, which has become a permanent part of the business in the Ústí Region. "Everywhere I go today and say the word Tour de Feminin, I immediately hear" ah, Mr. Vích is here", concludes Novota with a laugh.